I expect everyone is home now and has showered, thrown their clothes in the laundry (or trash) and is looking forward to a big dinner!

I really enjoyed the trip and we had a good crew, so thank you to all the hikers. I heard few complaints (most were from me about mixing heavy packs and loose sand), and I am very happy about our choice to go to the Lost Coast. I am missing sitting on the beach during the evening waiting for the sun to set. Strangely, I am also missing going to the local stream or pond to wash my hair. We had some great camp sites- Cooksie Creek and Miller Flat were my favorites.

We learned some things about food. Personally, I lost 6.5lbs this week, and that was post Arizona Ice Tea, Taco Bell and McDonald’s french fries today. We brought enough food (we couldn’t have carried more), but we’ll need to ensure our calorie count is higher for future trips.

Also, thank you to our logistics crew of Kathy, Phil and Alison Davis. Helping shuttle cars around saved lots of time, extra hiking and headaches.

I’m glad we returned with all 13 hikers in much the same physical condition as when they left. However, spend a moment for our “fallen”, including Marion’s Aerobie (which is sailing somewhere in the Pacific), Donald’s glasses (which are now a kit loosely assembled with duct tape), Donald’s Kindle (1/3 of the screen still works), Donald’s disposable razor (in two pieces but evidently functional), Niko’s left boot (still serviceable and fashionable wrapped in bright green duct tape with some excellent cobbling by Allen) and Enzo’s tent pole (not an antenna, Enzo!).

I hope everyone had an enjoyable time and feels a sense of accomplishment.

Enjoy the extensive photo gallery below! 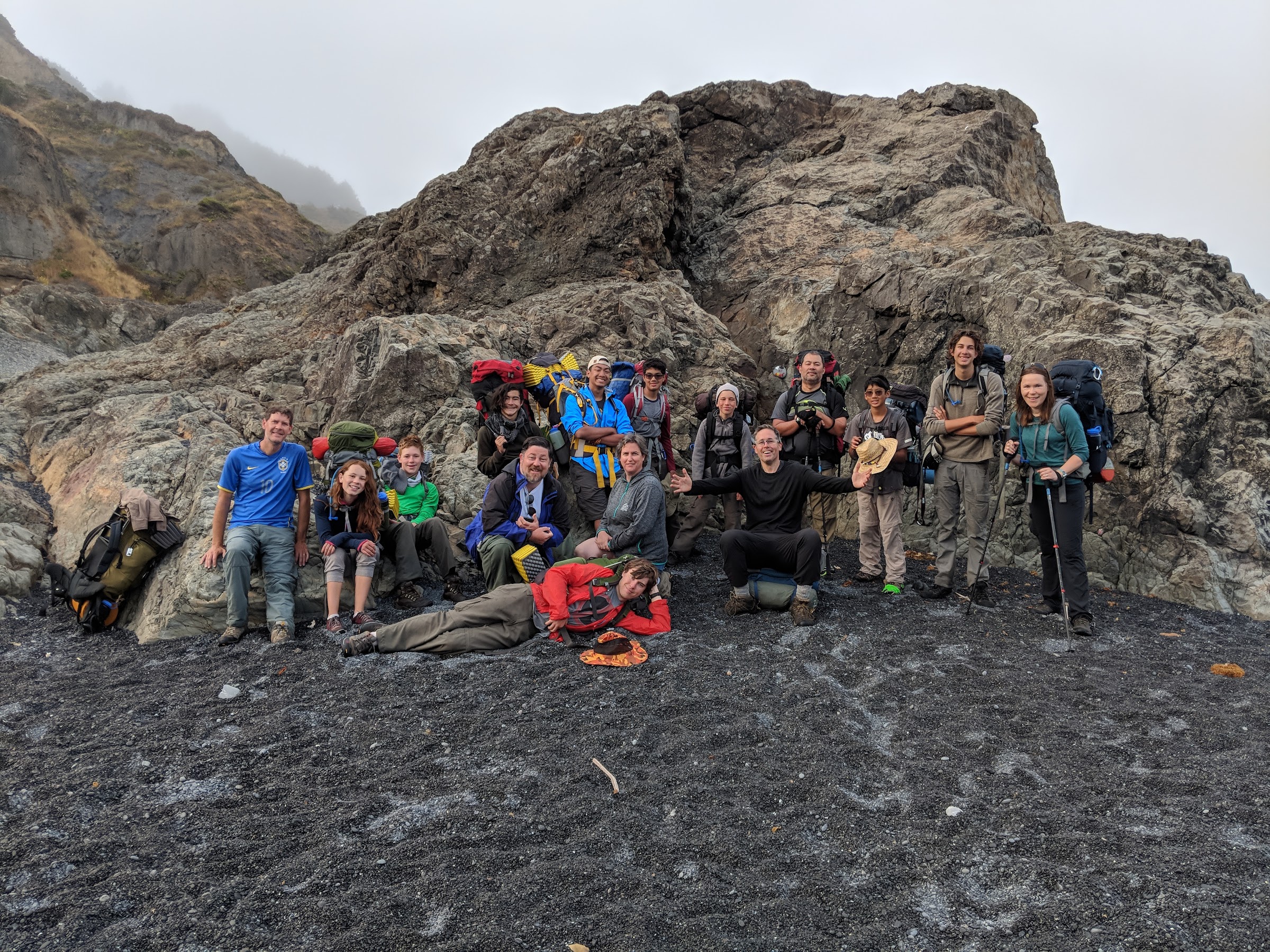 This is overdue, but the summer has been busy.

Fabulous support from the parents and families with a changing rota all week, ably led by Donna. Badges, wilderness sleep-over, the Clavey overnighter, Tribe advancement, 3,000 calories per day!

A beautiful location and a great chance to connect with nature, refine Scout skills and (for the adults) relax 🙂

I’m going to let the photos speak for themselves – click below! When we think of the fundamental underpinnings of scouting, we think of things like our Scout Law and Oath. But did you ever consider that these may not be quite as set in stone as you imagined?

Lets investigate – and take a look at the Scout Law and Oath in a few different countries. You may be surprised by what we find!

And with the Oath

On my honor I will do my best
To do my duty to God and my country
and to obey the Scout Law;
To help other people at all times;
To keep myself physically strong,
mentally awake, and morally straight.Meritbadge.org

Let’s take a look and compare this with the current Scout Law and Oath from the United Kingdom – birthplace of Lord Baden Powel and of scouting worldwide.

It is pretty similar (they call it a “promise” instead of an “oath”) – but interestingly doesn’t contain the final aspects of the US Oath about physical, mental and moral stance. I would also argue that the choice of words is more gentle; promise vs oath, keep vs obey.

On my honour, I promise that I will do my best
To do my duty to God and to the Queen,
To help other people
And to keep the Scout Law.Scouting UK

For the Law, there are also seven parts. It is close to the BSA Law on some points: trusted, loyal, friendly, considerate (courteous / kind), courage (brave); similar on thrifty (good use of time etc); but diverges notably in explicitly calling out membership of the worldwide family of Scouts and taking about respect.

Notably, the UK Law makes no mention of the need for cleanliness nor reverence in their scouts 😀

is to be trusted.
is loyal.
is friendly and considerate.
belongs to the worldwide family of Scouts.
has courage in all difficulties.
makes good use of time and is careful of possessions and property.
has self-respect and respect for others.Scouting UK

Scouting UK offers an alternative promise, including sign language / Makaton, and for Hindu, Muslim, Jewish, Christian, humanist / atheist scouts. There is even an approved Arabic version!

The organisation notes  that:

Scouting is available to people of all faiths as well as people who are humanist, atheist or have no affirmed faith and therefore must therefore take account of the different religious obligations or non religious beliefs of its Members.
Similarly, people of other nationalities resident in the United Kingdom, who may become Members of the Association, owe allegiance to their own Country.Scouting UK

Time to investigate one of our closest neighbors – Mexico!

Scouts Mexico also has a Promise – it is closer to the UK Promise than our USA Oath (again absent the mental, physical and moral strictures!)

I promise, on my honor, to do everything in my power to fulfill my duties to God and the Fatherland,
to help others in all circumstances
and faithfully fulfill the Scout Law.Scouts Mexico

The Mexico Law is a bit longer, but I love some of the sentiments it contains: loyalty to all, a friend irrespective of creed, color, nationality or social class – and best of all to “laugh and sing” at difficulties. Like the USA Law, there is a moral note about being “clean, healthy and pure of thought”/

figures his honor in being trustworthy.
is loyal to his homeland, his parents, his bosses and subordinates.
is useful and helps others without thinking of reward.
is a friend of all and brother of every scout without distinction of creed, race, nationality or social class.
is courteous and acts with nobility.
sees the work of God in nature, protects animals and plants.
obeys responsibly and does things in order and complete.
laughs and sings in his difficulties
is economical, hardworking and careful of the good of others.
is clean, healthy and pure in thought, words and actions.Scouts Mexico

Their Oath is very similar to the UK and Mexican Promise, and the Khazak Scout Law has common elements of Mexican, UK and US Scout Laws, with some local variation: I like the elements “a scout is restrainted” and a “friend to nature”!

Afghanistan had a strong scouting program up until 1978 when the communist regime banned it. But you can’t keep a good thing down, and in 2003 it began to reform. Scouting in Afghanistan has been co-ed since 1960.

I can’t find the detail of the Scout and Law apart from the statement “making a personal commitment“. Use the comments or email the webmaster if you can locate them.

(note:  Scouting in Afghanistan has not yet passed through international re-accreditation to WOSM, but continues to get advice and guidance from regional bodies).

Things are starting to look quite familiar on the international front: Nigeria’s Promise and Law are very similar to the UK with a dash of Mexico and Khazakstan

We could go on for ages, after all there are 169 registered national scout organizations! Let’s finish this brief circumnavigation in New Zealand.

Do what is right

New Zealand used to maintain an alternative promise, like the UK, but it retired this in 2017 replacing it with a single promise that is suitable for all scouts – setting a lead for inclusivity.

On my honour, I promise to do my best,
To develop my spiritual beliefs,
To contribute to my community, country and world,
To help other people,
And to live by the Scout Law.Scouts NZ

What insights can we draw from this short exploration of scout Law and Oaths from around the worldwide scouting community?

Maybe that there are some clear common threads: trust, loyalty, doing your best, having courage, being a friend to all.

And maybe also that there are some subtle but important differences on the emphasis different countries place on some aspects, eg morality, the environment, and religion.

My take away is that we are all a part of the worldwide scouting movement; a movement that shares strong common bonds and also supports local diversity.